The FPMS robotics teams competed at the state FIRST LEGO League Championship on 3/2. 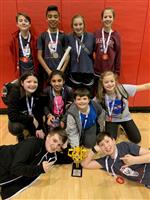 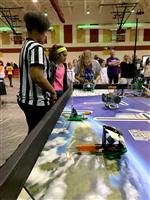 Gigawatts won 2nd place overall.  The Gigawatts also won the Global Innovation Award for their Astrofit suit. This is the second year in a row the team has won this honor.

The Global Innovation winner now has a chance to compete nationally for $25,000 that is used to help develop their product.  In addition, the Gigawatts and High Voltage teams received invitations to compete at the international level. They both will attend the Razorback Invitational at the University of Arkansas this May.